Financial markets in February were predominantly driven by investor worries about inflation prospects as they ignored the continued assurances from central banks that they do not expect persistent inflation to become a problem.

Benchmark US Treasury bond yields toyed with one-year highs, topping 1.6% and throwing the rest of the market into disarray before retracing some ground and ending the month at 1.4%. 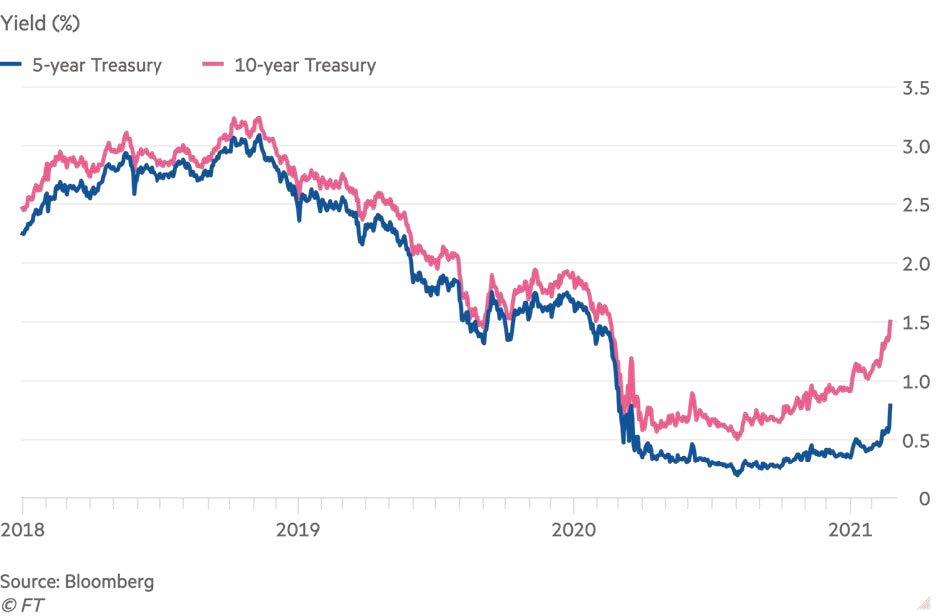 Tech stocks were worst hit by the rotation trade into cyclical counters, with the Nasdaq falling more than 1.5% for the month. In the last week of February the tech-heavy index had its worst day since October last year, sliding 3.5% when the Treasury yield rose above 1.5%. That contrasts with the February 2.5% increase in the Dow Jones Industrial Average, which features many of the defensive industry heavyweights. With volatility elevated, we have held off adding to interest rate-sensitive sectors but will be looking to take advantage of the sell-off in due course by increasing exposure to areas such as semiconductor production, mining and companies enabling decarbonisation.

Investors are betting on central banks having little choice but to raise interest rates earlier than envisaged – in 2023 rather than in 2024 as expected. However, during his much-anticipated presentation to the Senate Banking Committee in the last week of February, US Federal Reserve chair Jerome Powell reasserted the central bank’s confidence that inflation will not become “troubling” because of decades of well-anchored inflation through exceptionally volatile periods. His reassurance to financial markets was: “We have no intention of repeating the inflation mistakes of the 1970s.

Powell attributed the rise in bond yields to market confidence that economic conditions were normalising. But he cautioned that, while many parts of the economy had improved, there was still a long way to go before reaching full employment and thus the Fed would move “carefully and patiently” and give a lot of warning before its next move.

Financial markets, however, remain convinced that a combination of the vaccine rollouts, a release of pent-up demand as the economy recovers and the massive $1.9 billion US fiscal stimulus programme that has passed through the House of Representatives would together serve to stoke inflationary pressures.

The vaccine rollout continues across the world, with Israel far outpacing all other countries. The US programme has gained momentum and, given the significant strides made by the UK, the government has indicated that all restrictions may be lifted and the economy opened up by as early as mid-year. Emerging markets are still lagging their developed counterparts, with new strains of the virus – and the impact this has had on the efficacy of some of the vaccines – interrupting rollout plans.

Advanced economies are ahead on vaccinations 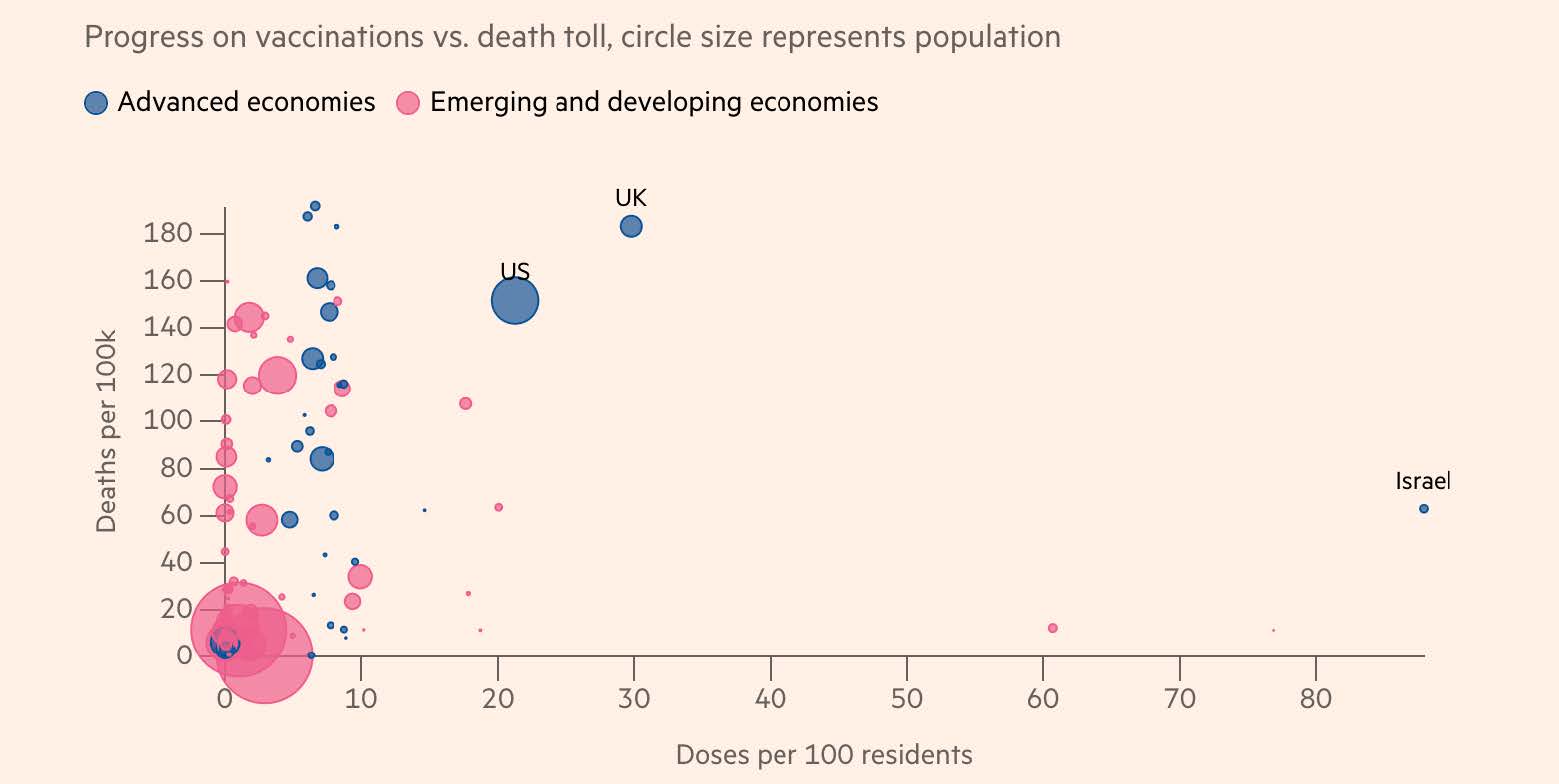 Global growth, as measured by the JP Morgan Global PMI produced by IHS Markit, slowed in January but the forward-looking indicator measures global growth in the gross domestic product as on track to advance 3% on an annualised basis.

Runaway commodity prices have done little to ease concerns about potential price pressures feeding through to producer prices. The oil price rose to $65 a barrel during February and there are some who are predicting it is on its way to $100 a barrel over the next few years. Base metals, particularly copper, have rallied strongly. The copper price is now within reach of $10,000 M/T, more than double its March 2020 level. 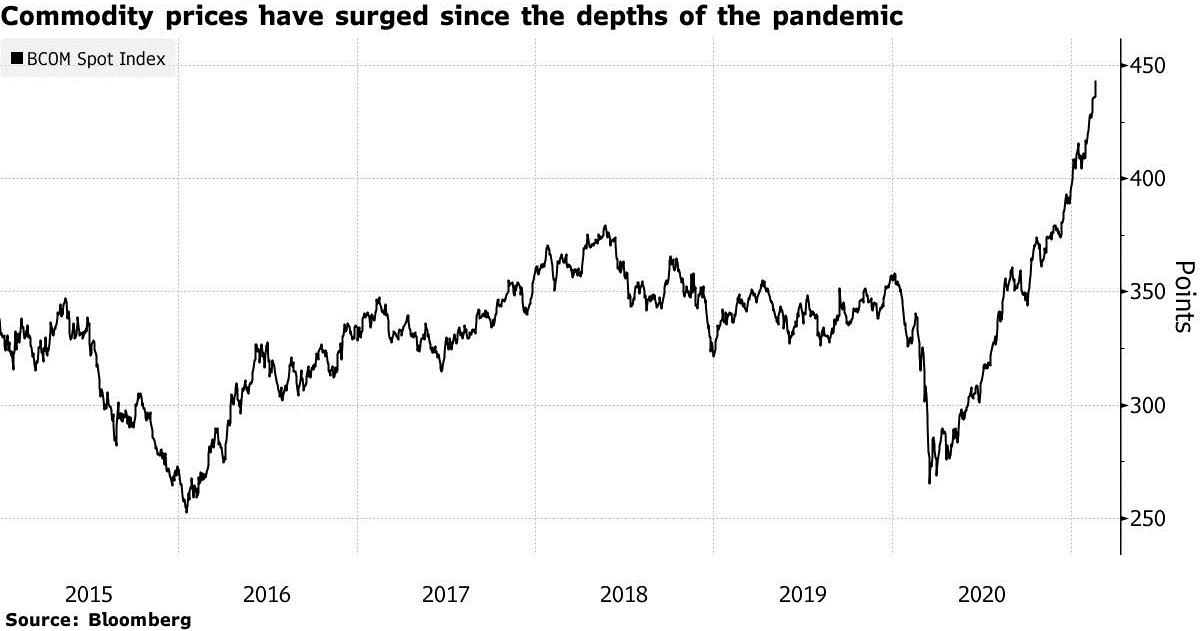 Looking forward, divergences of opinion between traders and central banks, as well as unpredictable, short- term inflation outcomes that could well occur in the months ahead, suggest that volatility may become a feature of markets for a while.