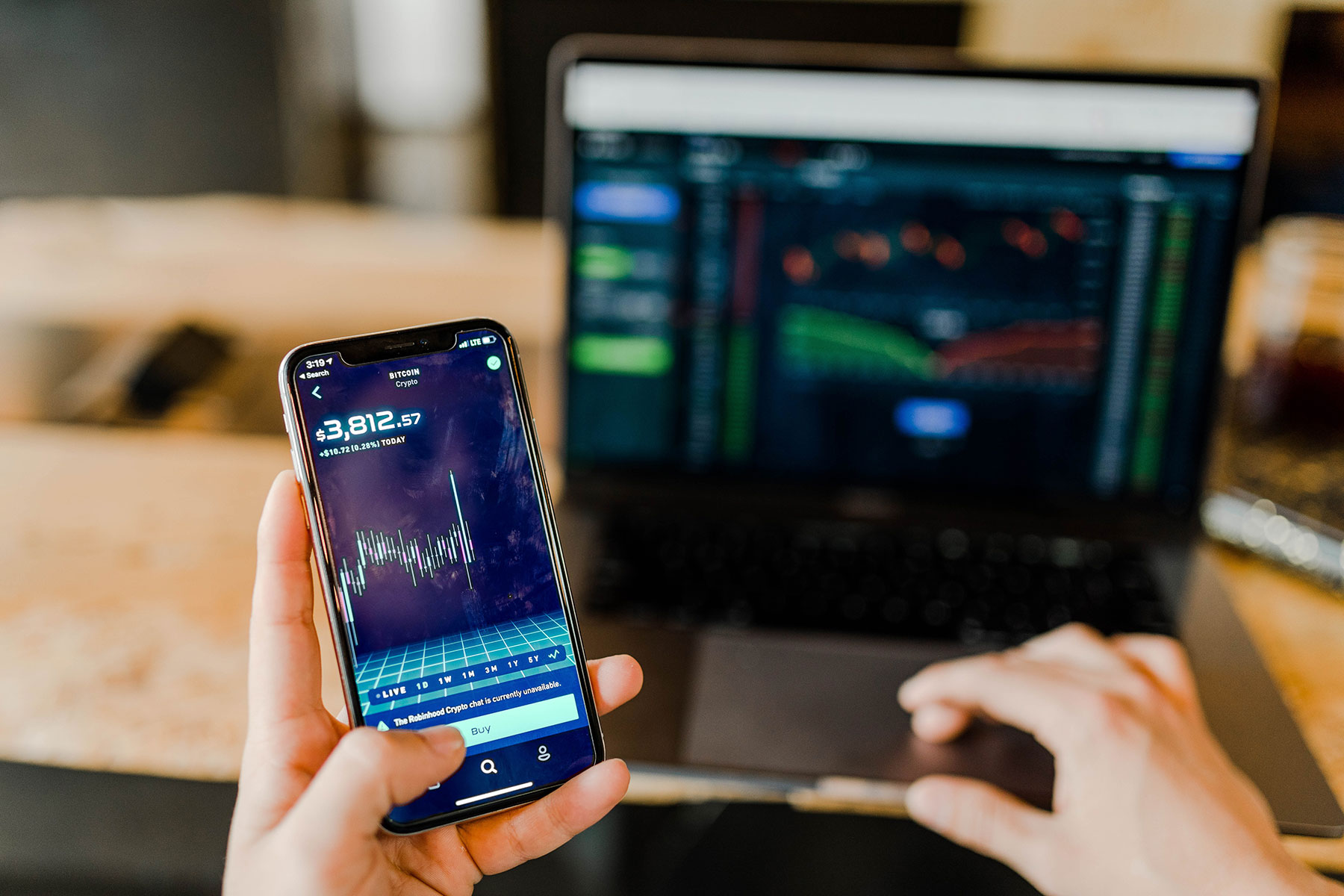 During September, the New Horizon strategies gave up gains made earlier in the quarter as turbulent equity and bond markets suffered declines due to a broad range of factors. These included concerns about global growth waning due to the highly infectious Delta Covid variant, broadening and deepening supply bottlenecks fuelling inflation and hastening interest rate rises, and numerous developments in China seen as posing downside risks to financial markets. The Citi Economic Surprise Index, shown below, highlights the extent to which negative economic surprises are now exceeding positive surprises.

Getting Used to Disappointment After months of positive surprises, economic data is below expectations again

All major stock markets remain in positive territory year-to-date with the exception of China’s CSI 300 Index which has declined almost 7% on contagion concerns surrounding Evergrande’s possible debt default and sweeping regulatory clampdowns on the internet, gaming and education sectors. During September, stock markets lost ground in a volatile trading month. The S&P 500 Index declined 4.9%, NASDAQ by 5.3%, the FTSE all-share Index by 1.1% and the Eurostoxx 50 by 4.7%. Some emerging markets performed better and the MSCI India index (where the New Horizon strategies have overweight exposure) registered a 2.0% gain. Precious metals, including gold, suffered steep declines. Sector rotations continue to play a large part in investor strategy. The graph below shows that nearly 90% of S&P 500 constituents have experienced at least a 10% correction during the year but the index has not drawn down by more than 5% at any point. 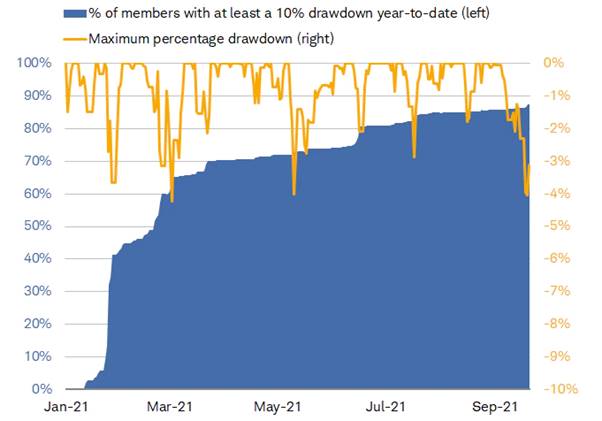 Investors have been focused on the impact of the looming debt ceiling deadline and the US Federal Reserve’s tapering intentions. For a brief period, the prospect of a government shutdown and the worst case scenario of a sovereign debt default and downgrade suggested that the Fed may have to move out its tapering timeline. However, the Senate eventually announced a deal which avoided shutting down on 1 October and extended government spending until 3 December. Meanwhile, tapering looks set to begin based on the Federal Open Market Committee’s (FOMC) post-meeting comments in late September. The committee judges that a moderation in the pace of asset purchases may soon be warranted and Chairman Jerome Powell opined that “a gradual tapering process that concludes around the middle of next year is likely to be appropriate.” The majority of FOMC members see the first US interest rate hike happening in 2022, a shift from June’s meeting when the majority expected it in 2023. As a result, the 10-year US Treasury yield has bounced off its lows and is trading at about 1.5% — a level investors were expecting only later this year.

Source: Factset. As of market close on Sept.24

The minutes from the Bank of England’s September Monetary Policy Committee meeting also highlight increasing concern about the durability of inflation. Some commentators now expect two interest rate rises next year with the first coming as early as the spring. UK gilts have reacted to the changes in interest rate expectations even more strongly than US treasuries with a 50bp increase in 10-year yield since mid-August. This trend may have further to run as inflation continues to surpass the Bank of England’s expectations. It now forecasts consumer price inflation to peak above 4% at the turn of the year (well ahead of the 2.1% forecast it issued in February) and not to fall back to its 2% target until the second half of 2023.

The Gap Between Inflation Expectations and Bond Yields Has Grown Wide 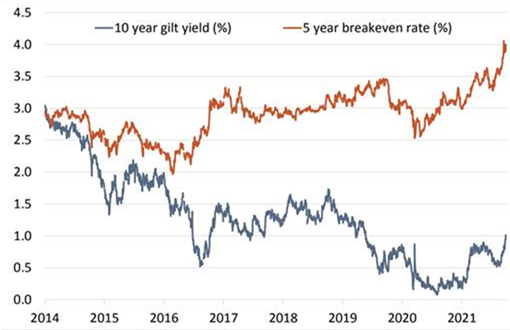 Higher interest rates tend to hurt the earnings and share prices of most sectors of the stock market other than the financial companies, which can benefit from a more favourable interest rate spread. Analysts are reducing earnings forecasts and are now forecasting S&P 500 earnings to be 7% lower than the second quarter which, if it were to transpire, would be the first instance since the 1930s of Q3 earnings coming in lower than Q2 during an economic expansion. It is worth noting, however, that companies are still indicating higher earnings forecasts. Anything other than a continuation of earnings beating forecasts is likely to result in further share price falls.

In addition to slowing economic growth, the news that Chinese property giant Evergrande was facing a debt crisis derailed market sentiment during September.

Evergrande Shares Have Crashed By Almost 85% So Far This Year

Evergrande’s situation has broader ramifications for the Chinese and, to an extent, global economy because the property sector contributes almost a third to Chinese GDP. A slowdown in the Chinese economy would not bode well for the rest of the world, which has relied on the vibrant recovery in China to provide tailwinds for their own economies. The property developer amassed mountains of debt, predominantly domestically, when it expanded from housing into a range of other ambitious initiatives including electric vehicles, sports and theme parks.

The crisis came to a head in late September when Evergrande failed to meet a debt payment. It has 30 days to settle and avoid triggering a formal debt default. Investors are on edge, waiting to see whether the government will back the debt, whether it will be rescheduled or whether the company will default and become akin to a ‘Chinese Lehman Brothers’. The Chinese government is not expected to bail out the company but has been adding liquidity to financial markets to avert broader contagion. Investors can perhaps gain some comfort from the commitment of the Chinese government to reducing speculative activities in the economy and implementing regulations to prevent excesses from building up.

The intention is to introduce more balance into the Chinese economy and promote “common prosperity”. The success will depend on whether the regulators can steer the private and public sector without too many missteps. 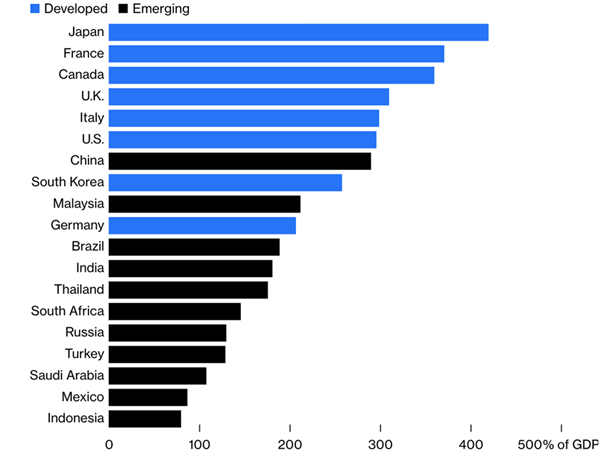 China is fortunate in that its population size, demographics and growth potential mean it cannot be ignored by investors. Although the policy shifts introduce uncertainty, the Chinese government has shown itself to be astute in the way it has managed its economy to date, particularly with regards to how it has recovered from the pandemic. Within the New Horizon strategies, Chinese equity exposure is balanced between infrastructure and technology sectors which, notwithstanding recent interventions, offer huge growth prospects at relatively low valuations. Sentiment in Chinese markets is currently weak and government policy is putting the brakes on growth. However, the final quarter is traditionally strong for Chinese equities with prices moving up on average by 3.6% in October alone. So from both a short and longer term perspective, it is not the time to withdraw from investing in the world’s second largest economy.