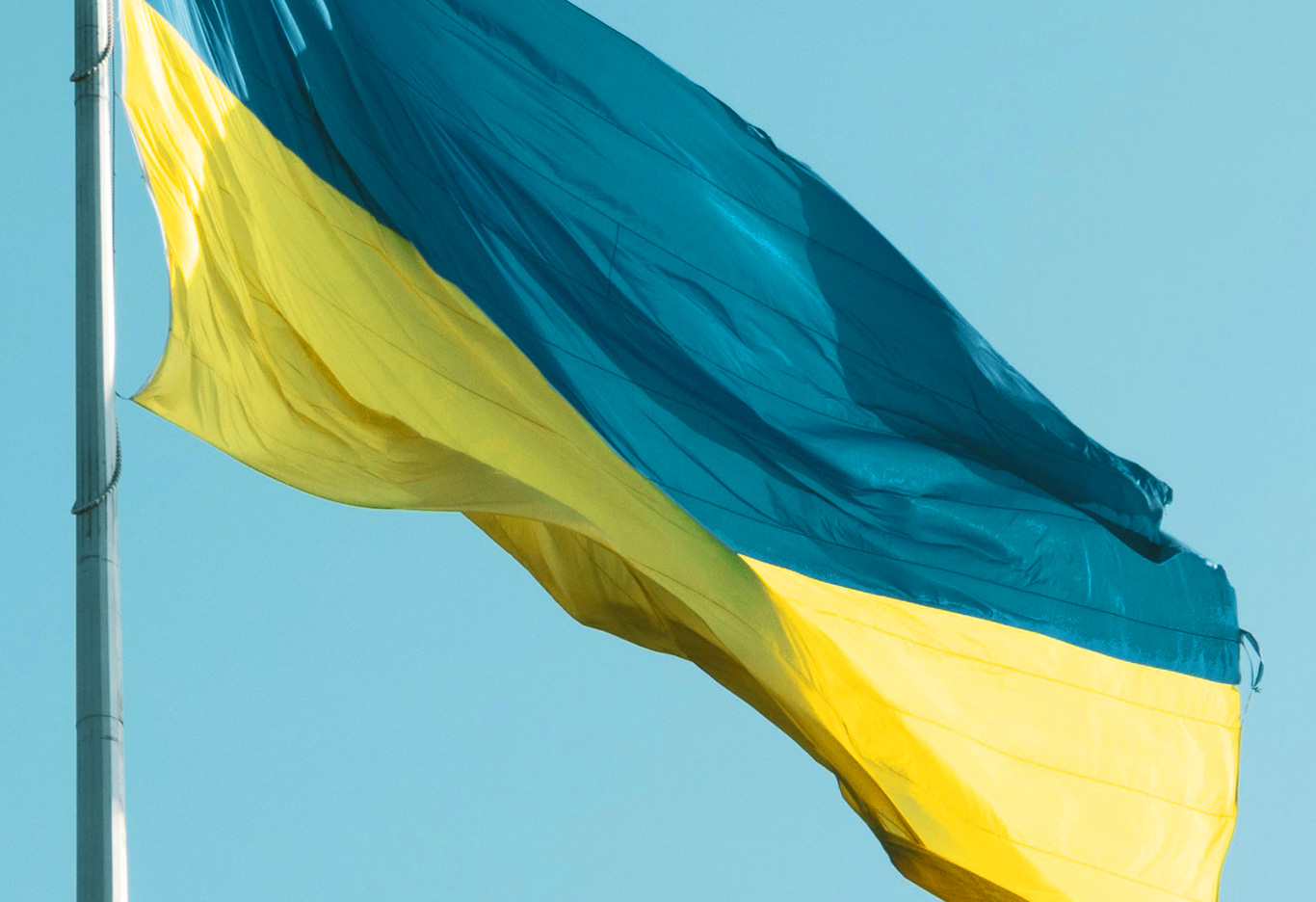 The anticipation of Russia invading Ukraine knocked stock markets towards the end of February. Share indices fell between 4% and 8% in the days leading up to the invasion on February 24, but then recovered as the initial sanctions announced were seen as being less detrimental to markets than had been feared.

The Nasdaq was hardest hit, slumping 7.7% in the days ahead of the invasion and standing 14% lower this year. Many European indices are also showing double digit declines, the exception being the FTSE 100 Index which is broadly level (You may remember this “call” at the start of January). There are increasingly attractive opportunities in European equities with valuations now so low that the risk/reward profile is better than at any time since the financial crisis of 2008. New Horizon strategies are currently underweight and exposure is likely to be added in March.

S&P 500:  Since the beginning of the coronavirus pandemic 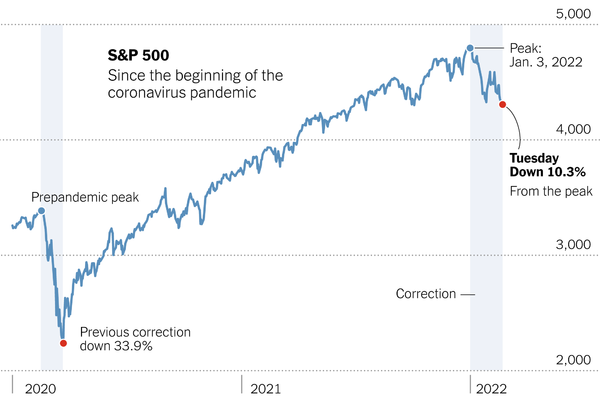 As could be expected, Russian assets and the rouble were hard hit by the decision to go to war, with the rouble-denominated stock market index shedding 54% in the first two hours of trading on the news of the invasion. This time the impact on the Russian financial market and economy is likely to be a far cry from Russia’s annexation of Crimea in 2014 when, after an immediate decline, the stock market went on to rally for the following nine years. Exposure to Russian assets in the New Horizon strategies has been minimised and in most cases is under 0.4% of the portfolio. 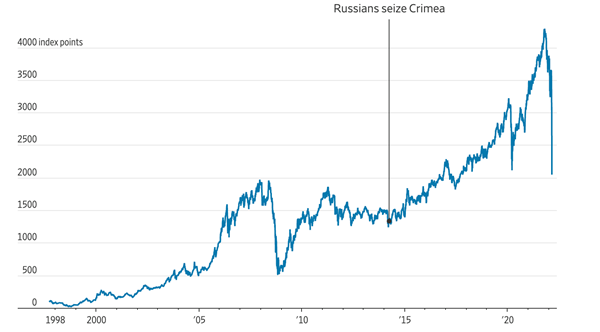 The price of Brent crude oil reacted strongly to the crisis, pushing through the $100 a barrel to $105. Dutch TTF Gas Futures prices also soared 70% in the immediate aftermath of the invasion, given Europe’s reliance on Russian gas supplies. 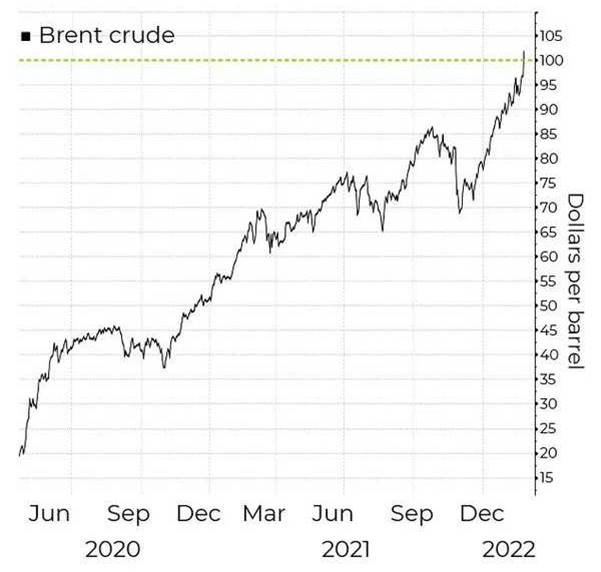 The war is expected to lift global inflation even further through its impact on a large part of the world’s broader commodity and agriculture complex. Russia is a one of the world’s largest oil producers. Together, Ukraine and Russia supply much of the world’s wheat, nickel, aluminium, and palladium. These commodities are well represented in the New Horizon strategies, especially palladium, and gains here as well as from inflation-linked bonds and global property are offsetting losses in equity markets.

The Russia-Ukraine war ousted the US interest rate hiking cycle as the core theme driving financial market sentiment for most of February. However, investors continued to speculate on the future trajectory of interest rates, now factoring in the possible impact of the hostilities in the short term. While markets had begun to price in an aggressive 50-basis point increase in the Federal Reserve fund rate in March, with up to seven rate hikes thereafter, Fed officials have talked down the prospect of a heavy hitting initial rate hike and the market is now pricing in a total of seven rate hikes this year.

Opinion is divided over whether the war will lock in inflation rates at their current highs due to the domino effect higher commodity prices and supply disruptions will have on prices in general. In the last week of the month, the Fed’s preferred gauge of inflation, core PCE, came in slightly ahead of expectations, at 5.2% versus 5.1% but the broad headline rate of 6.1% is a long way ahead of the Fed’s target for average inflation of 2%. The Bloomberg graph below highlights how the US inflation peak could be delayed based on rising oil prices, with CPI forecast to exceed 8% if oil reaches $120 a barrel and to hit around 8% if it remains between $90 and $95 a barrel. 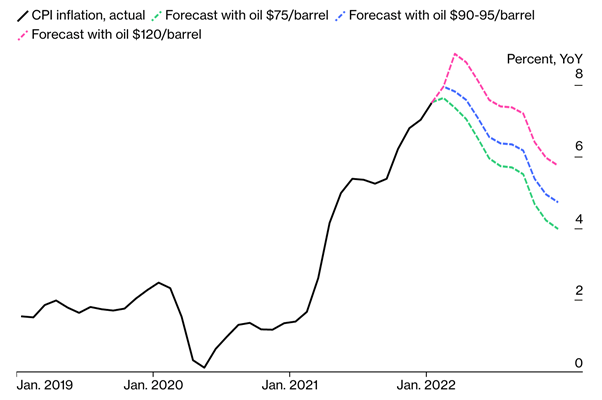 Markets are not at this stage anticipating inflation rates to stay high for the long-term. The price of inflation-linked bonds and derivative contracts in the US reflect the belief that inflation will average 2.5% for the next decade. 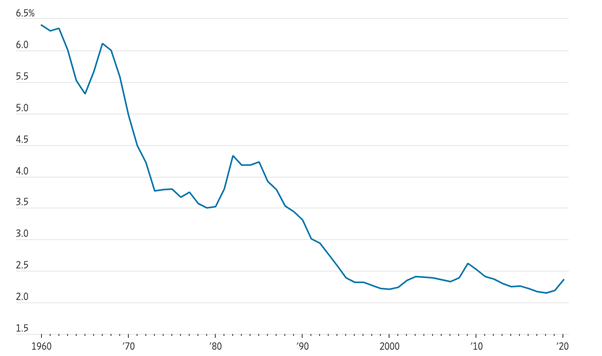 While it is too early to tell whether Russia will achieve its aim of taking over Ukraine, Vladimir Putin’s decision to walk away from diplomatic solutions is expected to alter the geopolitical landscape for the worse in the long term.

Russia and China have been moving away from a reliance on the dollar, with the proportion of trade payments in dollars between the two now only 16% versus 97% in 2014. Russia now has more of its reserves in gold than in dollars.

Developed world countries have introduced stiff sanctions on Russia, Putin, his foreign secretary and the oligarchs in the wake of the invasion. These range from trade sanctions, travel bans, freezing the assets of the wealthy and, most recently, removing most of the country’s access to the SWIFT payment system and freezing the foreign reserves it holds overseas. However, these are not likely to have an immediate impact on the country and some of them are extremely difficult to implement, particularly with regards to sanctions on Russian individuals’ assets.

Of most concern is Europe’s huge reliance on gas supplies from Russia – a situation that is not going to change in the short to medium term. The region has invested heavily in renewable energy sources but is probably decades away from becoming self-reliant on green energy sources. Germany has nonetheless officially halted certification of the Nordstream 2 pipeline, which has been the subject of ongoing negotiation between Russia and Europe.

As a result, Russia has been spared sanctions on energy supplies, which alleviated the impact on the stock market as seen in the dollar-based RTS index of liquid Russian shares in the graph below. 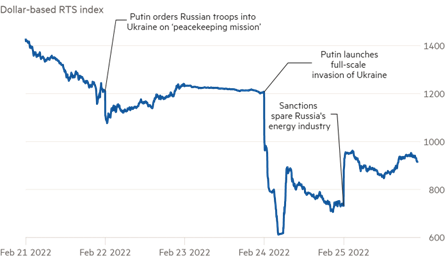 Looking forward, Bloomberg has mapped out different economic scenarios going from bad to worse as a result of the Ukraine crisis. Initial indications would suggest the first is unfolding, with Russian oil and gas still available and markets on the up off after their steep sell off. In this event, the Fed is seen as likely to engage in a milder monetary policy tightening regime than currently priced into markets.

A scenario in which Europeans are denied access to Russian gas and the world to its oil could well trigger the stagflationary outcomes that have been the subject of so much debate during the pandemic. Inflation would become even more of a problem and central bank action would stall growth, perhaps resulting in a hard landing for the global economy. 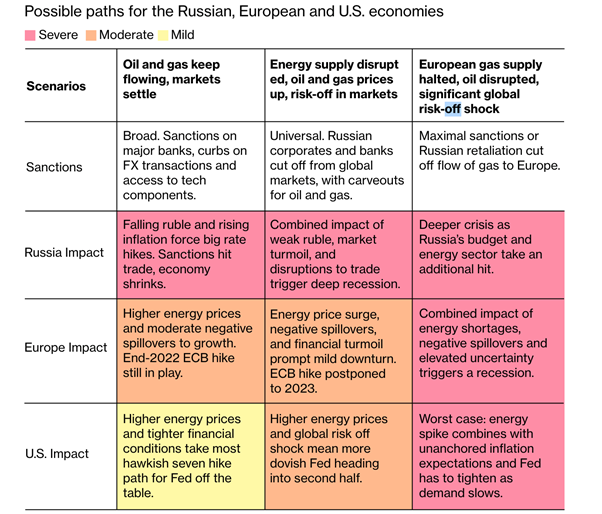