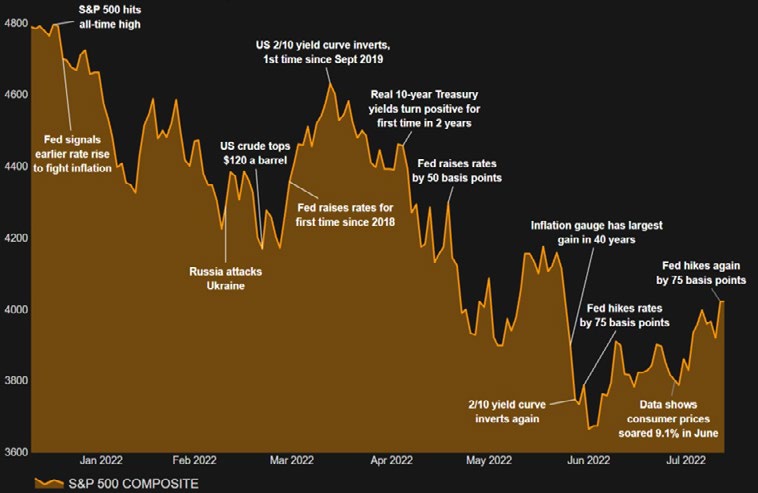 INFLATION FEARS LEAD TO RALLY IN EQUITIES AND BONDS

Equity and bond markets regained some ground during July after the worst first half year for decades.

The graph below demonstrates how turbulent this year has been for the global economy and markets. The latest concern is that the Fed’s rate hike cycle will tip the economy into recession. Nonetheless, signs of an easing in inflation have given equity investors a reason to get back into the market.

The S&P 500 jumped 9% in July and European equities recovered by 8% but the UK FTSE All Share Index remains a standout performer, now unchanged year-to-date. China was the only stock market to remain in negative territory for the month, with the SSE Composite Index shedding 4%.

Equity investor sentiment rallied on the turnaround in commodity prices, which raised hopes that peak inflation may be in sight. Oil prices have fallen back to around $100 a barrel and wheat prices and other soft commodities continued to decline having already fallen by around 25% from their peaks in June.

Treasury yields also retreated, with the benchmark US 10-year Treasury heading back towards 2.5%. Much uncertainty lies ahead, however, and it’s too early to call a bottom to the stock or bond market just yet.

Second quarter GDP data from the US last week showed the economy had performed worse than expected, declining 0.9% during the quarter. It is the second consecutive quarter of negative growth and therefore satisfies the definition of a technical recession.

However, US President Joe Biden, Treasury Secretary Janet Yellen, and Fed Chair Jerome Powell rely on the National Bureau of Economic Research’s Business Cycle Dating Committee as the final arbiter of a recession. The Committee bases its recession call on a more extensive range of economic indicators than just GDP data. These typically include personal income, employment, various forms of real consumer spending and industrial production. Many of these indicators still point to an expansion.

Economists and policymakers also have divergent opinions on how deep a recession could be and how long lasting, with many taking heart from the fact consumers and company balance sheets are in good shape and may be sufficiently robust to withstand an economic slowdown.

Slowing growth – Growth is forecast to slow to 3.2 percent this year and 2.9 percent next year, downgrades of 0.4 and 0.7 percentage points 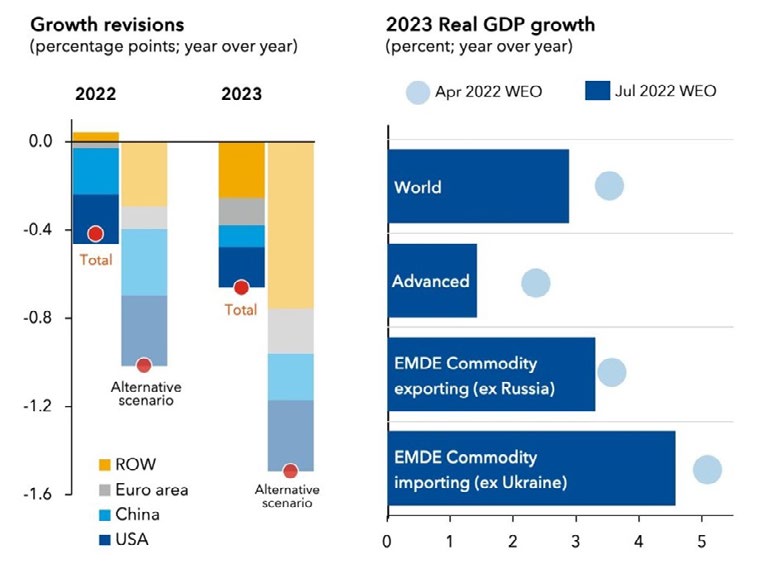 The US is seen to be at most at risk because of the Fed’s aggressive monetary policy stance and its stated intent to raise interest rates steeply until there is firm evidence that inflation is under control.

Europe is expected to go into recession if Russia closes access to its gas supplies.

Gazprom reduced the amount of gas supplied via the Nord Stream 1 pipeline to 40% in June and has since reduced it a further 20%. However, the region has already been reducing its dependence on gas from Russia, with Germany importing 15% less gas and the Netherlands 30% less gas than on average over previous years. 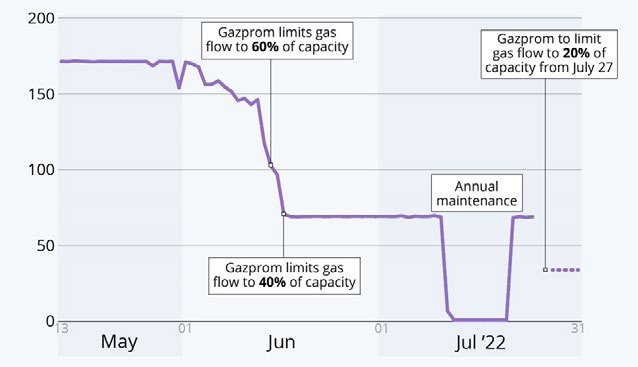 Historically, value stocks have outperformed during recessionary periods because they tend to have more defensive characteristics and trade at cheaper valuations. Conversely, growth shares tend to underperform because they are more expensive, no longer benefit from a rising economic tide and cannot deliver on the growth expectations factored into their valuations. However, growth stocks have already weakened sharply this year and will look attractive if any recession is short-lived and investors seek to pre-empt the recovery. 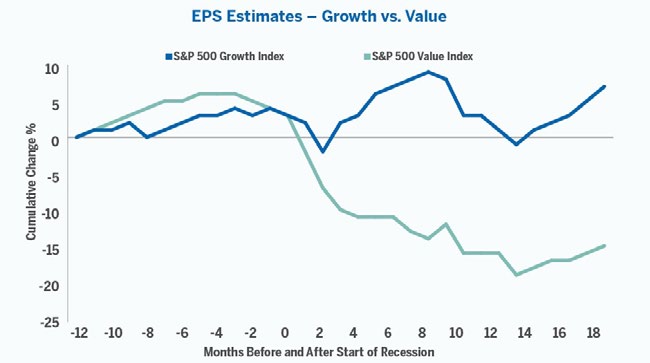 Alongside all the talk of recession, there is a growing consensus that inflation is set to peak and may well begin to retreat in the second half of the year and into 2023. Both hard and soft commodity prices have come off their peaks on fears of a recession. Deflation could become a risk in the next few years if the central banks are overly aggressive into 2023, pushing the global economy into a deep recession and resulting in sharp contractions in consumer demand and spending.

Already, inventory build-ups in response to supply constraints brought on by the pandemic and Russia’s invasion of Ukraine have forced US retailers like Walmart to offload their stock at discounted prices.

Regardless of broader economic factors, there remain sectors with strong earnings and sales growth that are set to do well. One such sector is cybersecurity where strong underlying performance combines with an ever-supportive backdrop. As the number of digitally connected devices soars, there has been a sharp increase in cyber- attacks forcing businesses and governments to bolster defenses with nine out of ten companies worldwide affected. International surveys show that cyber incidents have been identified as the biggest risk for corporates.

Consequently, there is no sign of spending slowing. Double-digit growth expectations keep getting revised upwards and, even in the event of a global recession, regulatory obligations and the need for proper business continuity make cybersecurity an expense that cannot be cut back.

Source: Markets in the markets 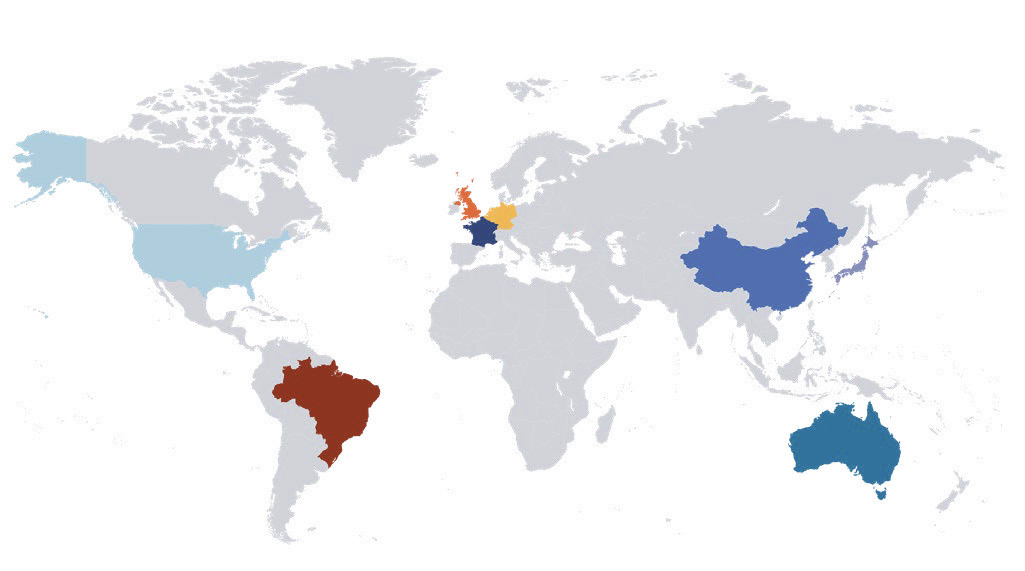